skip to main | skip to sidebar

i feel as though we have barely passed the christmas season...january simply flew by. today's feast day on the liturgical calendar...feast of the presentation 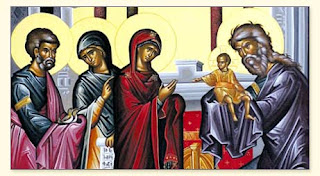 (image source) has always felt like the true end of celebrating the nativity of the Lord (which technically ends much earlier in january, on the feast of the baptism of the Lord). one of our traditions is to put the nativity scene carefully away for the year & replace the old candles around the house with new ones. also referred to as candlemas, this is a traditional day to have candles blessed in rememberance of Christ as the Light of the World...
for all those prognosticators out there eagerly awaiting the vernal equinox & hoping for some weather that pushes crocus blooms...today is also groundhog day! my home-state hero...punxsutawney phil sadly predicted 6 more weeks of winter (isn't this always the case!), but i don't believe him! i downright refuse to believe him! he's wrong~!! definitely...
after the disappointment of that varmint in a top hat & his furry opinion (yes, i'm miffed at him this year!) we moved on to superbowl sunday preparations. in boyworld this is a very. BIG. deal.
i'm just the cook.
Big Bro's favorite team is in the super bowl year & so it's become quite a party here. i decided to combine another celebration with our feast preparation & thus, our dessert falls in with the nutella theme for tuesday...world nutella day! the recipe will follow tomorrow or the next day... be sure to catch all the sure-to-be-yummy nutella posts on february 5!
i think the timing of world nutella day is superb because it is also mardi gras. my fat tuesday fun usually includes a chocolate indulgence! it also includes daydreaming of the year that i might spend this time in venezia...for carnevale! check out britt-arnhild's recent post & her glorious links...
following on the heels of all this celebrating...ash wednesday, the beginning of the season of lent.
but now, it's back to la cucina for me...!
Posted by qualcosa di bello at 2:22 PM

Woohoo! So many celebrations so little time!

And I don't care what anyone says, there *is* no other groundhog worth mentioning ;)

We had hoped to visit Punxsutawney during our trip to PA, but didn't get a chance....it's a good reason to go back! We just got home today, The Son can't believe we left just hours before the SuperBowl- what was The Husband thinking?

This is my favourite time of year, with all the festivals it brings.

Let's meet in Venezia some day :-)

Actually I'm headed back in September before another art workshop I'm attending. I just can't get enough of it.

Hope you got my email. Can't wait to hear about your upcoming trip.

the mother of this lot said...

I'm thinking of a very rich chocolate cake for Tuesday myself!

sognatrice...isn't that the truth...& about punxy phil...even when he's wrong (this year) that is still true!

bella...it is probably good you skipped punxy...it is a complete madhouse this time of year.

"Let us go to the foot of the Cross, and there complain....if we have the courage." Saint Madeleine Sophie Barat 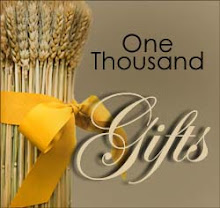 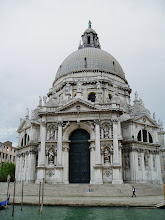 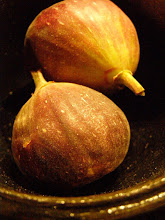 qualcosa di bello
"qualcosa di bello"...Italian for something beautiful...God's creation is full of beauty & that is what I hope to share with all who visit on my blogging journey..."piacere"...it is a pleasure to have you visit!

Been There, Done That